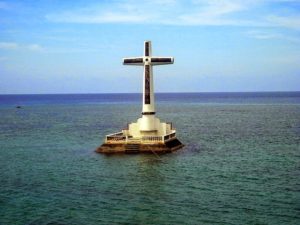 Camiguin is an island province of the Philippines located in the Bohol Sea, about 10 kilometers off the northern coast of Mindanao. The island of Camiguin is of volcanic origin and composed of four young stratovolcanoes overlying older volcanic structures. These include Mt. Vulcan and Mount Hibok-Hibok, still considered active having last erupted in 1953. 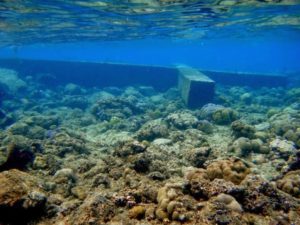 A very popular tourist spot in Camiguin Island is the Sunken Cemetery. During the volcanic eruption of Mt. Vulcan that lasted from 1871 to about 1875, after continuously spewing out lava into the sea, it gained a height of nearly 2,000 feet and submerged areas of Catarman, including the town’s cemetery. Today, all that remains of old Catarman are the ruins of an ancient Spanish San Roque church, a convent and a bell tower. Remnants of the structures and gravestones of the cemetery were still seen during low tide until 1948 when Mount Vulcan erupted for the fourth time, which buried the area deeper by 20 feet. The Sunken Cemetery is commemorated by a huge cross which was erected in 1982. 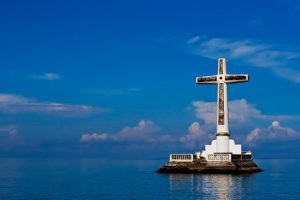