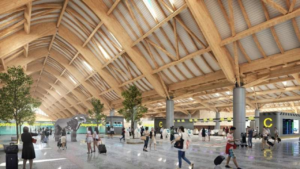 A series of glorious peaks greets travelers as they approach Pampanga, one of the country’s most historic Luzon provinces.

These peaks of Mt. Arayat and the Zambales mountains are gods of folk tales that stand as guards of the province and the people.

The builders of the sprawling new terminal of the Clark International Airport pay homage to these mountains, as their majestic silhouettes are reflected in the edifice, reflecting a deep sense of place.

Other features of the province such as those on renowned Mt. Pinatubo and the serene Sacobia riverbed provide further inspiration in the interior design of vital sections of the airport.

Bundled with the ease and the comfort that will be accorded to travelers in this new terminal, the design inspirations all come together to make the experiences at the new Clark International Airport pleasurable and meaningful. 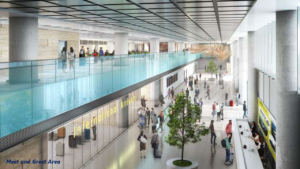 The melding of Central Luzon’s natural and cultural heritage is manifested in the interesting interplay of shapes, textures, and forms in its function areas. With construction starting under the administration of President Rodrigo Duterte, the completed structure of the new terminal is currently undergoing the fitting of all necessary installations and the preparation of the operational readiness protocols, according to Bi Yong Chungunco, CEO of the Luzon International Premier Airport Development Corp. (LIPAD).

LIPAD is in charge of the airport’s operations and management. Terminal building construction was accomplished by Megawide – GMR, structural design by Budji + Royals. For the fit-out and interiors, LIPAD appointed international design firm Populous together with Casas + Architects. Formal hand-over of the terminal building by the Bases Conversion and Development Authority (BCDA) to LIPAD for fit-out and installations is to be scheduled soon. 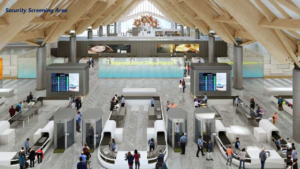 The new, fully fitted and expansive international airport in Pampanga, with increased levels in logistics capacity, technology, and total service offerings, marks a milestone in aviation history. Its predecessor facility, the former Clark Air Field, was at the home base of the 13th US Air Force, the then largest US airfield outside of US soil. Its transfer to the BCDA, after the withdrawal of the bases from the Philippines, coincided with other developments in the area to usher in a new phase for Pampanga and the rest of the country.

As the new Clark International Airport opens to the world as the premier gateway to Asia, new records in economic and social development for Central Luzon are expected to follow suit. The new Passenger Terminal Building is 1.5 kilometers from the existing passenger terminal and serves both domestic and international flights, with the boarding gates for each directionally color coded. It has a design capacity for 8 million passengers per year and has 4 floor levels, 18 aero bridges and has, in totality, a floor area of 110,000 square meters. Earth tones and the central color of soft gray grace the terminal floors and pillars in the Check-In Hall. 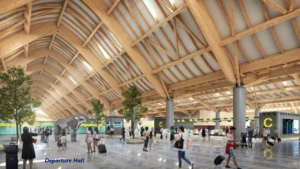 Cool and soothing, accents of green and blue are thrown in to emulate the greenery and Mt. Pinatubo’s crater lake, respectively. A specific tint of blue that is near turquoise represents the water formation on Mt. Pinatubo crater lake. This tint is likewise present in glass structures situated around the terminal, particularly the Security Screening Area.

The undoubtedly Kapampangan “parol”, or star lantern, with rhythmic displays of colors are hanging fixtures in the central Airside Retail Area. The kaleidoscope-like colors are symbols of family merriment and meaningful moments. 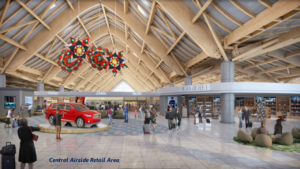 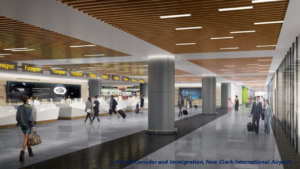 Passengers are greeted with a refreshing air of grays and creams at the Arrival Corridor leading up to Immigration. At the Baggage Reclaim Area, passengers are treated with a ceiling design that mimics the jagged stonewalling of majestic caves found in Central Luzon.