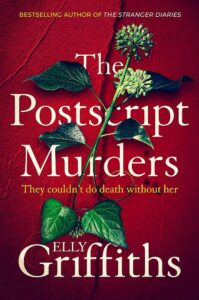 Non ancora pubblicato in Italia. Nell’ultimo romanzo di Elly Griffiths, tre investigatori dilettanti si uniscono per risolvere l’omicidio di una loro amica.
The latest novel by Elly Griffiths sees a trio of amateur detectives investigating the death of an elderly woman. The police think that Peggy Smith died of heart attack, but her friends are convinced that it is murder: Natalka was Peggy’s carer. Originally from Ukraine, she has brilliant math skills and a secret past. Benedict left church life to buy a coffee shop, but his life is still a struggle. Edwin was Peggy’s neighbour and friend. The three of them start investigating Peggy’s death on their own until they are threatened by an armed man and, at that point, DS Harbinder Kaur has no choice but to investigate and do her best to keep the trio out of trouble.
The Postcript Murder is the second novel in the DS Harbinder Kaur series and I enjoy this character who I found relatable, fun, and smart. There are many twists, but there is also some fun and I am really looking forward to the next installment.