HELEN CALLAGHAN – EVERYTHING IS LIES 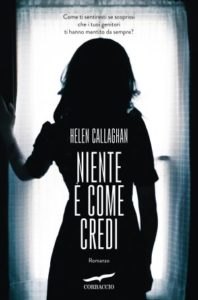 What would you do if you find out that everything you believed in was a lie? In Helen Callaghan’s second novel, 26-year-old Sophia arrives to her parents’ house to find her father stabbed and barely alive and her mother death hanging from a tree. The police think that it’s a murder-suicide, but Sophia knows her parents and they would never do something like that. So when she finds her mother’s diaries, Sophia finds out that she didn’t know her parents at all.

The narration alternates between the present, in which Sophia investigates what happened to her parents, and the past, narrated through her mother’s diaries where she tells about her past and the bad choices she made that led to her death.

I really liked the character of Sophia. She is strong and determined. While grieving over her mother’s death and hoping for her father’s recovery, she has to deal with her arrogant boss who didn’t take well that she abandoned him when she found out that he is married. She finds herself in dangerous situations and manages to come out of them and she is no scared to face the truth about her parents. Her relationship with her mother is strong so that when she finds out the truth about her, her feelings toward her don’t change.

There are many twists throughout the novel until to the very unexpected end. The novel is dark and gripping and the characters are well-developed. I liked the author’s first novel, Dear Amy, and I found this new one even better. I read until late at night captivated by the author’s brilliant writing and the absorbing plot.