KARIN SLAUGHTER – PIECES OF HER 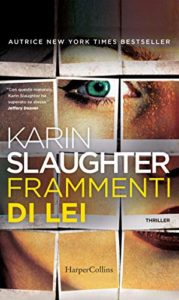 Andrea thinks she knows her mother. After all, she is her own mother, right? One of the people closer to her. But the day of her thirty-first birthday, Andrea finds out that she doesn’t know her mother as much as she thinks she does. After an episode of violence in the mall and a break-in in her mother’s house, Andrea finds herself on the run across the United States. But instead of hiding, Andrea is looking for the truth about her mother’s past. But she will be able to live with what she finds out?

Karin Slaughter is on my list of these authors I always get excited about every time she has a new book coming out. The pace of the novel is slow, but the tension is high, and she always creates complex and intriguing female characters (although I found Andrea at times irritating). The story is told from two points of view and switches between the present and the past and I couldn’t tell you which one I liked best. Full of twists, some of which I saw coming and some that were completely unpredictable, I was completely hooked by this book.