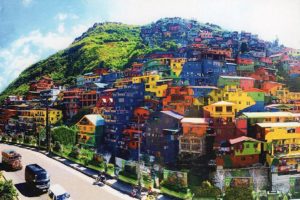 La Trinidad is a small town which serves as the capital of the province of Benguet which is part of the Cordillera Administrative Region of the Philippines. La Trinidad is the country’s main supplier of strawberries. In 2004, it has won the Guinness title for the World’s Largest Strawberry shortcake. Aside from strawberries, it is also known for its vegetable and flower plantations.

La Trinidad is a town just beside Baguio city, is slowly turning several communities into one humongous mural. The Stonehill community is comprised of 3 sitios. These are Sitios Stonehill, Botiwtiw and Sadjao of Brgy. Balili. This mural project has been called Stobosa, named after the three sitios and there are about 180 houses in this area. With the supervision of Baguio City’s Tam-awan Art Village artists and the sponsorship from a paint company. La Trinidad dull set of houses sitting along the mountains have become more delightful as they are converted into a humongous painting.

It is worthy to mention that the residents of these sitios have actively involved themselves in this project. Tourists who flock Baguio, have also considered checking out the mountain of houses in various colors. Passing by Benguet’s capital would mean enduring the traffic especially along Kilometer 3. Now, with the multi-hued Stonehill community just above the Balili River turned into a favela like a masterpiece, getting stuck in traffic becomes more pleasing, at least to the eyesight. La Trinidad, besides being known as the vegetable capital and strawberry capital of the Philippines, the town is being promoted as the “Valley of Colors.”

It’s More Fun in the Philippines