Robert Galbraith (aka JK Rowling) is back this year with the fourth novel of the series that has as its protagonists private detective Cormoran Strike and his assistant Robin. In this fourth novel, Robin has finally become a real and true private detective herself and a partner of Cormoran Strike, even though the relationship between the two is strained following the events at the end of book three. Despite this, their business is thriving and they had to hire more detectives. After a young man comes to their office because he thinks he witnessed a murder when he was a child and a minister asks for their help, the two of them find themselves between the walls of the Parliament and dressing up for parties to find out the truth. 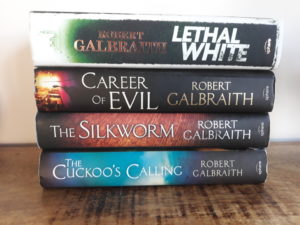 I literally couldn’t put it down. I read the more than 600 pages in just two days. Once again, I loved reading not only about mystery and murders but about the complicated but captivating relationship between Cormoran and Robin. I was completely engrossed in the story and the characters and the author’s writing kept me glued to the page. JK Rowling/Robert Galbraith has already announced there is going to be a fifth novel and I am already looking forward to it.