IAN RANKIN – IN A HOUSE OF LIES 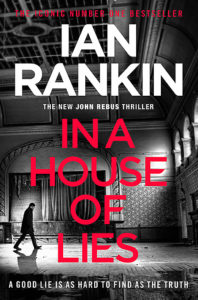 Ian Rankin is a legend when he comes to crime novels. His protagonist, John Rebus, is now on his twenty-second book and he is still going strong.

This novel focuses on the disappearance of private detective Stuart Bloom. He disappeared in 2006, but a poor investigation lead to no body and no killer. Now, twelve years later, Stuart’s body has finally turned up and his family and the media want the police to find out the truth once and for all. DI Shiobhan Clarke is still reeling from an internal investigation that almost smeared her reputation, but she has to try and put her past behind to find not only the killer, but also to discover if someone can be blamed for the first investigation in Stuart’s disappearance, and that someone could be her former partner John Rebus. Now retired, John manages to get involved not only in Stuart’s investigation, but also in the case of a teenager accused of killing his girlfriend.

I love the character of John Rebus. He makes me laugh with his witticism and his sharp mind kept me glued to the page. The story is twisty, unexpected and never boring. The author’s attention to detail gives the reader a real look inside the police work and I found fascinating reading not only about the investigation but also about the bond between partners and members of a team.