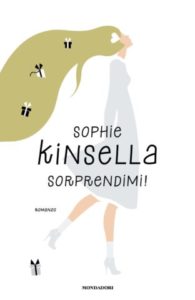 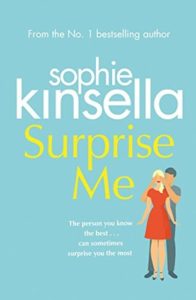 I’ve been a fan of Sophie Kinsella since I was about 14 years old, when I first read Confessions of a Shopaholic, the first book featuring Becky Bloomwood. Since then I’ve been assiduously following Becky’s adventures, I would buy the book as soon as it came out, and I’ve been a fan of Sophie Kinsella’s stand alone novels, as well. My favorite of her stand alone novels is Can You Keep a Secret?, but I also enjoyed her last one, Surprise Me.

The protagonist of this novel is Sylvie. She and Dan have been together for ten years and they got to a point where they know what the other is thinking and they finish each other sentence. After a doctor predicts that they will probably spend 65 more years together they completely freak out. Sixty-five more years waking up and sleeping with the same person, doing always the same things? To spice up their relationship, they decide to give each other little surprises, but they don’t have the expected result. From double appointments to snakes and weird photoshoots, things got really wrong (the only good thing was me laughing out loud) and then Sylvie starts to suspect that Dan is hiding something from her. But what?

Once again, Sophie Kinsella didn’t disappoint. The situations Sylvie gets herself into to surprise her husband are hilarious (I especially recommend the scene of the sexy photoshoot), but there are also a few moving moments that balanced the story. Completely absorbing, with likable and engaging characters, Surprise Me is the perfect summer read, a must for all fans of Sophie Kinsella out there and if you aren’t one, yet, you should go out and buy one of her books because they are really good.