ANDREW WILSON – A TALENT FOR MURDER 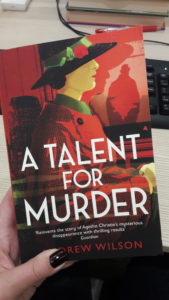 This is the perfect read for all the fans of Agatha Christie out there. This is not another Hercule Poirot or Miss Marple’ story, but this is a fictional story about their creator based on real facts.

In December 1926, Agatha Christie was at the peak of her success. Her novel, The Murder of Roger Ackroyd, had been well received but now she was feeling the pressure to write her new novel, The Mystery of the Blue Train. On the personal side, her husband was planning to leave her for another woman and she still hadn’t gotten over the death of her mother two years earlier. She suddenly disappeared, and despite the huge search organized by the police, she was found only ten days later in a hotel under another name. She didn’t remember what happened and today it’s still one of the mysteries surrounding the Queen of Crime.

In his novel, Andrew Wilson fictionalizes these ten days into a story of subterfuge, lies, and crimes. Agatha Christie is blackmailed by a man in committing an homicide for him. He threatens her daughter and all the people she loves, so she has no choice but to disappear for ten days. Searching for her there is Superintendent William Kenward, the detective in charge of the investigation, who is convinced that her husband had something to do with it. And Una Crowe, a young and ambitious journalist (also my favorite character in the novel) who wants to prove that she can have a career despite being a woman from a rich family.

I loved how the author made Agatha Christie more human and realistic, with her fears, doubts, and anxiety and not only the genius behind the mind of two of the greatest detective in literature.

As a big fan of Agatha Christie, I really enjoyed this captivating novel full of twists and suspense, and if you are not a fan, you can read it as a simple detective story because it’s really good.