B. A. PARIS – THE BREAKDOWN 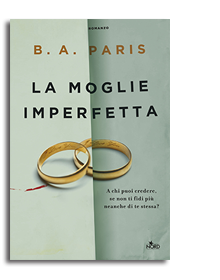 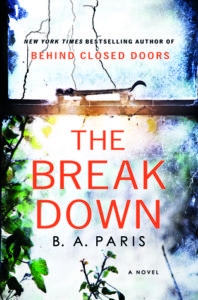 After a night out celebrating the end of the school term with her colleagues, Cass Anderson takes a shortcut through the woods on her way home. The weather is bad and the woods are dark, so when Cass sees a car on the side of the road and a woman sitting inside she doesn’t think that stopping is such a good idea and drives on. The next morning she finds out that the woman was found murdered inside her car. Wracked with guilt, Cass starts having memory loss. From things she doesn’t remember buying to forgotten dinners, Cass seems to be suffering dementia as her mother. Her husband and best friend don’t seem to believe her and who is making these mysterious phone calls that she receives every day?
The story is told in first person from Cass’s point of view and I love that the narrator is unreliable. You don’t know what is going to happen next and you can trust Cass’s word and the more her memory deteriorates, the more the suspense raised and I wanted to see how far the author would go.
This is one of these books that once you start reading you just can’t stop. It is intense and fast-paced and the characters are so well-crafted that at some point or other I suspected each one of them.
I was surprised by the final reveal and, although it may seem a little improbable and far-fetched, I just loved it.
A beautifully-written plot, an atmospheric setting, unreliable characters, and surprising twists create an engaging and suspenseful novel, the perfect read for fans of Girl on the Train by Paula Hawkins and Gone Girl by Gillian Flynn.