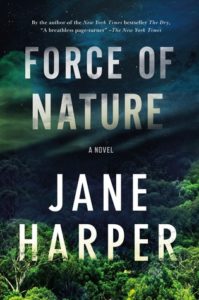 This is Jane Harper’s second novel featuring Federal Agent Aaron Falk. I still haven’t read her first novel, The Dry, yet (that’s something I do sometimes, starting a series from the middle) but I heard really good things about it so when I put my hands on Force of Nature I was really excited about it and I wasn’t disappointed (by the way, I am planning on reading The Dry, I am just waiting for my increasing huge TBR pile to slim down a bit).

In Force of Nature, a financial organization as organized a corporate retreat to improve the bonding among colleagues. There is ten of them, divided in two teams of five, men vs women. The two teams have to spend three days camping and hiking in the Australian bushland, whoever gets first at the meeting point wins. But after three days only the men team turns up at the meeting point. The women finally arrive hours and hours later, scratched and injured, but it’s only four of them. Where is the fifth?

Aaron Falk and his partner Carmen Cooper of the Melbourne Financial Investigations Unit take part in the search because the missing woman, Alice Russell, was working for them as an informant. Did Alice’s disappearance had to do with her job as an informant? Or it has to do with the Australian bushland, once the hunting ground of a serial killer?

The narration alternates between the past and the present, between the women trying to survive in the dry ground and the agents’ investigation as they try to understand what happened during these three days.

Between the Australian wilderness, a cast of intriguing and complex characters (I especially loved the character of Aaron Falk and his troubled past), themes like the bullying, past rivalries, and the relationship between parents and their children, and the author’s captivating writing, the suspense is always high making Force of Nature is an unputdownable and gripping novel.