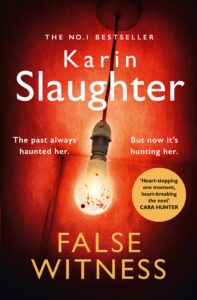 Pubblicato ora in Italia con il titolo Falsa testimonianza. Il nuovo romanzo dalla regina del crimine Karin Slaughter vi lascerà senza fiato.
She is back! The creator of my favourite series (Will Trent series) is back, but with a new standalone and I won’t complain, not only because she’s promised a new Will Trent novel for next year, but also because it doesn’t matter what she writes, I always love it.
Atlanta, Georgia. Still in the middle of the Covid pandemic, it is the story of two sisters, their complicated relationship, and the secret that they’ve been keeping for twenty-five years. Leigh is now a successful lawyer, but her life could crumble down if she doesn’t defend a guilty man who knows what she and her sister did when they were barely teenagers.
Intense, dark, and suspenseful, False Witness is not at all an easy read. There are themes of abuse, addiction, and neglect, but you won’t be able to put it down thanks to the brilliant and addictive writing of Karin Slaughter.