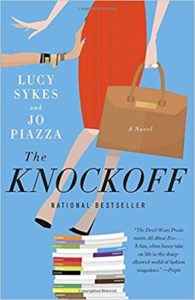 Imogen Tate is the 40-something editor-in-chief of Glossy magazine. After six months away from work for health reasons, Imogen goes back to the office to find that her former assistant Eve is now in charge of the place and she has completely revolutionized the magazine. Soon, Imogen has to forget about the printing magazine as everything will be published online and she will have to learn to use social media if she wants to keep her job.

Eve tries to undermine her but Imogen’s hilarious attempts to use 140 characters (this book was published before Twitter introduced the 280 characters) result in her getting a huge following on social media. As Imogen tries to keep up to pace with technology, she will have to try to save the magazine she loves and get rid of the enemy she hates.

The two female main characters are complete opposite: Imogen is nice, funny, and strong and I liked her right away. Eve is the enemy, the young and mean girl that you usually find opposite to the heroine of the novel. This is a novel about the power struggle between two women, between two different ages, and it’s a novel about the excessive use that people do of technology nowadays (there were a few apps I never heard of, which made me feel old!).

With hilarious moments and captivating stories, this is the perfect novel for fans of The Devil Wears Prada. And if you loved this, then you will have to read the authors’ next novel Fitness Junkie about a woman who has to lose weight to keep her job and joins all kinds of fitness activities, including Free the Nipple Yoga (which apparently is a real thing).