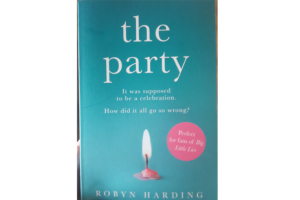 Jeff and Kim Sanders have a nice life, a beautiful house, and two well-behaved children. The oldest one, Hannah is turning sixteen years old and her parents let her have a party and a sleepover at their house with few of her friends. But in the middle of the night, Kim is woken up by an upset Hannah. Something went terribly wrong during the sleepover and one of the girls had an accident. The consequences of that night have effects on the entire family. Jeff is blackmailed by one of Hannah’s friends, Kim has to face other mothers’ opinions, and Hannah is entangled in a complicated relationship with the cool kids of the school and she has to decide where her loyalty lies.

The book opens with Kim waking up and finding Hannah at the foot of her bed in tears and you know right away that something is wrong. That the narration goes back in time to the morning of the party, but it is not revealed what actually happened that night, only that one girl got hurt. The truth is revealed slowly, one bit at the time, and I love this in a book because builds and suspense and makes you want to read more to see what is going to happen next.

The story is very character-driven and told from different points of view, Hannah, Jeff, Kim, and Lisa, the mother of the girl who got hurt. Each one of them tell their side of the story and I found myself siding with each one of them at one point or another.

With themes like bullying (both on social media and face-to-face), marriage, and the complicated relationship between mother and daughter, this is a suspenseful, engaging and thought-provoking novel that will keep you glued to the page.