Sinarapan is scientifically known as Mistichthys luzonensis. There is no translation of this name in Filipino, though the word means “tasty” or “delicious.” Sinarapan is the smallest fish in the Philippines and considered as the World’s Smallest Edible Fish. This species is found only in Lakes Buhi and Bato and other bodies of water in Camarines Sur province, part of the Philippines’ Bicol region.  The fish has an average length of 12 millimeters. Males are smaller than females.  Alive, sinarapan are transparent with large black eyes. Preserved specimens are opaque with a few dark spots over their sides, backs and heads. This tiny goby is reported to occur in vast numbers in Lake Buhi, from near the shoreline out to where the water is at least 10 to 20 meters deep, and breeds throughout the year. 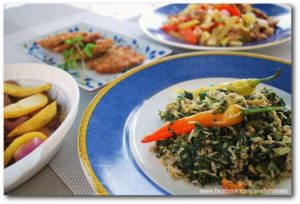 The uniqueness of its taste has found delight in the taste of most Filipino food enthusiasts. In Bicol, Sinarapan is either prepared as dried fish or served as a dish, commonly sautéed lightly with oil, flavored by tomatoes and onions. As a trademark of dishes in Bicol Sinarapan is given a touch of spice from chili. This dish goes very well with rice. Another dish from this fish is the Sinarapang Paksiw which is also loved by those who visit the province of Camarines Sur. Sinarapan extra special is that it is very rich in calcium, and considering its delectableness.

Conversely, being endemic and cannot be found in other places, Philippines smallest fish is now at risk of extinction due to overfishing. Thus, everyone is encouraged to, by any means, conserve the life these world-recognized fish.