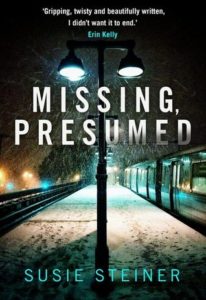 I am so happy to talk to you about Manon Bradshaw. She is the protagonist of a series of crime novels set in Cambridge. Manon is in her thirties, she is single, and she is a kick-ass detective really good at her job. In this first novel, she investigates the disappearance of a girl, Edith Hind, a student living a Cambridge. She just disappeared in thin air, leaving behind her phone, keys, and money. Nobody knows where she is but it also seems that the people in her life are hiding something: her parents, her boyfriend, and her best friend. Manon is in a race against time to find Edith because the more time passes the less the chances she is going to find her alive.

I really liked the character of Manon. She is flawed, which makes her more realistic, but she is also really good at her job, not afraid to stand up to her male colleagues, and she has a good heart (even if she tries not to show it too much). I am really happy this is the first in a series because I am already looking forward to read more about this character. The story is full of twists, none of which I saw coming, and the final revelation completely took me by surprise. The Christmas atmosphere of the novel may not be ideal in August, but this book is completely worth a read.