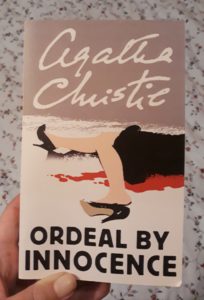 I am back with a new review for another novel by Agatha Christie (I know, but I love this author and they will keep coming because there are so many of her books that I still haven’t read). This time there is no Belgian detective and his “little grey cells” to solve the case, but Dr. Arthur Calgary. He is the one informing the Argyle family that a nightmare from their past is coming back to life. Two years earlier, Jacko Argyle killed his mother. He ended up in prison where he died a few months later. It turns out that Jacko is innocent, so, once again, the family goes under scrutiny as the police try to figure out who is the real killer. This new investigation means more secrets, lies, and deceit, it means that no one in the family trust each other, because if Jacko didn’t kill his mother, it means that someone else in the family did it.

Even without my favourite detective, Agatha Christie knows how to keep me glued to the pages. The story is twisty, suspenseful, and, as usual, I couldn’t figure out the truth until the end. Like the characters in the story, you don’t know who to trust, who is telling the truth, and who wanted the head of the family dead. This is another win for all Agatha Christie’s fans, another must-read which was also turned into a fantastic series on BBC!