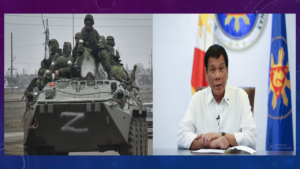 President Duterte on Ukraine-Russia war: In the end, we have to take sides

President Rodrigo Duterte on Friday said he would want the Philippines to remain neutral on the Ukraine-Russia war, but admitted time will come that the government would have to take sides in the conflict.

For me, we stay neutral. But reality tells me that in the end, we’ll just have to select which side we would be, President Duterte said in a speech in Ilocos Sur.

Earlier this week, the Philippines voted in favor of a United Nations General Assembly resolution condemning Russia’s invasion of the former Soviet state. The Department of Foreign Affairs also called for massive assistance for those affected by the crisis.

President Duterte expressed hope the war would not go out of control, fearing its possible effects on other nations. Just don’t let them use a nuclear device, because all of us will be affected.

Russia has continued its relentless attacks on Ukraine, targeting key cities and tightening its grip on southern areas.

Several Ukraine-based Filipinos have fled the war-torn country — with some choosing to return home and others opting to evacuate to nearby European nations.

The Department of Foreign Affairs gives an update on the repatriation of Filipinos from Ukraine. Nineteen Filipinos have arrived in Philippines. Some are now in Poland, Moldova, Hungary, Romania and Austria. 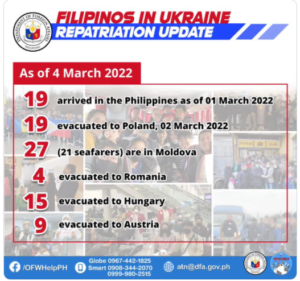