The Hanging Coffins of Sagada, Philippines 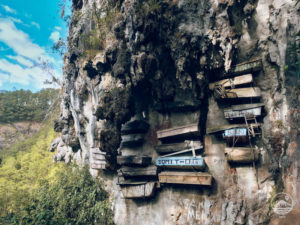 The Hanging Coffins of Sagada is unusual cemetery of Mountain Province in northern Philippines and one the famous place that you don’t have to missed if you will visit Sagada. Situated six hours away of Banaue and from the valley, you will climb down on a cliff to reach the famous hanging coffins of Sagada. The locals believed that this peculiar burial practice has been existent for more than millennia. 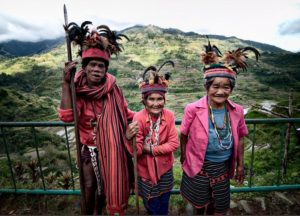 There are reasons why ancient Igorots (collective name of several Austronesian ethnic groups in the Philippines, who inhabit the mountains of Luzon) prefer to be interred in this manner. First, elderly Igorots feared to be buried underground because the body tend to rot easily if exposed in the soil. Lastly, during the pre-Hispanic period where tribal wars and headhunting were existent, the elders and its relatives were afraid that the heads of their deceased loved one might be smuggled by the headhunters and used as a trophy in certain Kalinga tribes. It is then reasonable for the Igorots to place the corpse of their deceased on the side of a cliff.

The people also believes that the higher the coffin, the more important their family member to them. With this practice, it will also bring their loved one closer to heaven and in ancestral spirits. The coffins on the other hand look shorter than we thought because the corpse is placed in a fetal-position signifying that the way we should exit this world must be the same way we enter.

The hanging coffins reflects the rich heritage and the importance culture of the Igorots.