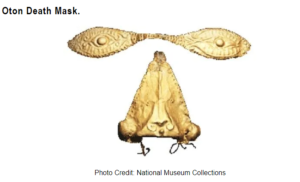 The gold death mask of Oton, was discovered in the 1960s by Alfredo Evangelista and F. Landa Jocan. It consists of a gold nose-disc and eye-mask, both of which were found in a gravesite in San Antonio, Oton, Iloilo Philippines.

The gold mask–dated from the late 14th to the early 15th century A.D.–is the first of its kind recovered in the Philippines. It was part of ancient burial practice, with the gold mask serving as an amulet against evil spirits.

The death mask was made by cutting out two pieces of thin gold sheets. The pieces would then be placed on a soft surface, after which the craftsman would use a pointed tool to press the intricate design from behind.

The practice of using a gold mask to cover the face of the dead was brought to the Philippines by the southern Chinese. Around that time, Oton was a center of the trade route, so it didn’t take long before a limited group of Filipinos started to adopt the custom.