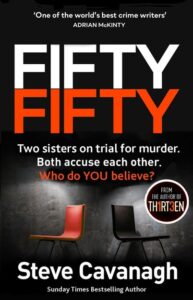 The former mayor of New York City has been brutally murdered and the suspects are his two daughters who accuse each other. Defense attorney Eddie Flynn defends only the innocents and, usually, he is able to figure out if they are telling the truth on the very first meeting. He thinks that Sofia is the innocent sister, but even Kate Brooks, a lawyer on her first case, believes that her client, Alexandra, is innocent. Who is telling the truth?

I love this series, now on its fifth book. I love the character of Eddie Flynn, the ex con turned attorney, whose cases become more dangerous with each book. Things turn a little more emotional in this book and my heart broke a little for this character. The female characters in the novel are complex and strong and very well-crafted, especially Kate and Harper, the former FBI agent who helps Eddie in his cases. This is my favourite book in the series so far and I am already looking forward to the next installment.