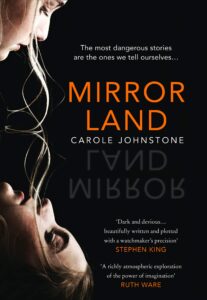 Mirrorland is not your typical thriller. It is intense, stimulating, but also, sometimes, I found it a bit hard to follow as fantasy merges with reality.

It is the story of two twins who grew up in a world of fantasy created by their mother. Now adults, they have gone their separate ways, but when one of them disappears, the other drops everything and goes back home to figure out what happened to her sister. While the police is convinced that her twin is dead, she is not so sure and the truth is darker than you can imagine.

Slow-paced, suspenseful, and carefully-plotted, this is a story that will capture with its complex characters and their many secrets. You won’t be able to put it down!