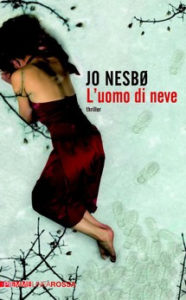 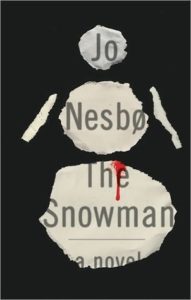 Pubblicato in Italia con il titolo L’Uomo di Neve. La città di Oslo è coperta dalla sua prima neve. Una donna scompare nel mezzo della notte e l’unico indizio trovato dalla polizia è la presenza di un pupazzo di neve fuori dalla sua casa. Quando un’altra donna scompare, l’ispettore Harry Hole sa di avere tra le mani un serial killer and deve trovarlo prima che sia troppo tardi.
A woman suddenly disappears from her family home in the middle of the night. Another one is killed and only her head is found. What links these two women is the presence of a snowman on both the crime scenes. The best man of the Oslo Police is put on the case, Inspector Harry Hole. Investigating with the help of Katrine Bratt, a new officer in his squad, Harry Hole finds out that in the past years other women suddenly disappeared in the same mysterious way. These disappearances seem also to have something to do with the sudden vanishing of a detective of the police of Bergen twelve years before. But it is not only what seems to be his most difficult case to keep Harry’s mind busy. He also has to deal with his problems with alcohol and his troubling relationship with his ex-girlfriend, Rakel, and the new man in her life. As he struggles with his personal and professional life, Harry knows that he needs to find this serial killer before he can find other victims.
The Snowman was my introduction to Jo Nesbo’s novels and also the second Nordic thriller that I’ve read. I have to say I really like these genre of books. The writing is different from the thrillers I usually read and the pace is slower. The names often confused me and I had to go back and check who was who. Despite all this, I really loved it.
The characters are very well portrayed and their psychology is explored in depth. The Nordic setting is very atmospheric and appealing. The tension raises page after page and it will keep you guessing until the end.
This is the seventh book featuring inspector Harry Hole and I will definitely need to do some catching-up and read the other books in the series. The movie version featuring Michael Fassbender will come out on October 13th.