KATHLEEN BARBER – ARE YOU SLEEPING 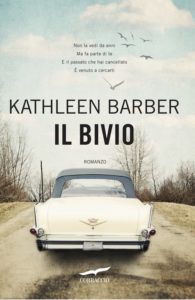 When Josie Buhrman was 16 years old, her father was killed in their home in the middle of the night. Thanks to her twin sister Lanie’s testimony, the killer was arrested, but their mother abandoned them to join a cult and Josie and Lanie moved in to live with their aunt Amelia and cousin Ellen. Something happens between Josie and Lanie that pushes Josie to leave and go hitchhiking around the world. Thirteen years later, Josie has changed name and hasn’t spoken to Lanie in ten years. 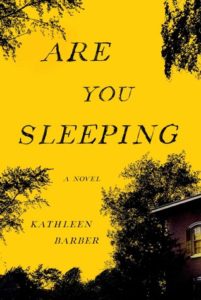 She lives a quiet and normal life in New York with her boyfriend Caleb and works in a bookstore until someone opens a new investigation in her father’s murder. Poppy Parnell is an investigative journalist who thinks that the man that Lanie accused of the murder is innocent and she wants to prove it on her podcast. The podcast goes viral and everywhere Josie goes she hears people talking about it. And when her mother dies, Josie has to go back to that family she hasn’t seen in years. In addition, Josie has to deal with all the lies about her past and her family she has told Caleb as they threaten to come to light.

I really loved this book. I am not a fan of podcasts, having never listened to one, and I don’t really understand their appeal but I was completely caught up in this novel.

I loved how the author included transcripts from the podcast along with comments and twits from the followers, some of which were hilarious.
The characters are very-well developed, they are realistic and likable, some more than others. I liked Josie. She is strong and determined, although she is a bit over emotional, but it is understandable after everything she is been through. Even though Josie and Lanie are twins they are completely different and they reacted differently to their father’s murder with consequences that drove them apart. I loved Josie’s relationship with her aunt Amelia and her cousin Ellen who are the only people in her family Josie’s stayed closed to.

A gripping and suspenseful novel about lies, jealousy, family drama, and murder, I was completely addicted to this novel from the first page and I couldn’t put it down.