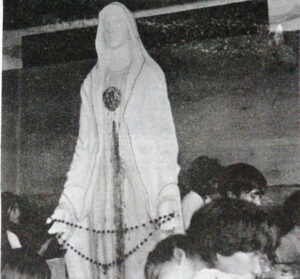 In a shrine close to the Loakan Airport of Baguio City, one can find an imposing marble statue of the Blessed Virgin that once attracted thousands of devotees. In July 1979, it was reported that the Marian statue began bleeding, the blood seemingly flowing from her exposed heart. Laboratory tests allegedly confirmed that the dried blood was actual human blood, but strangely, the sample analyzed contained no blood cells.

Supreme Court Justice Juvenal Guerrero attested to the fact that the bleeding-heart phenomenon actually happened, and soon, people were flocking to the shrine to pray and seek favors. A chapel was constructed, and devotees even organized themselves into the Missionaries of the Bleeding Heart of Mary to popularize the devotion. There were skeptics, however, and one TV station exposed it as a hoax. Today, the image is still visited by a few devotees, housed at Our Lady of the Bleeding Heart of Mary religious center.